The Mass: Step by Step

Since the early Church, the Sunday following Easter has been a time to especially implore God’s mercy. At the beginning of the 20th century, a Polish nun, Sr. Faustina received private revelations from Jesus asking for the promotion of the devotion to his Divine Mercy. These revelations are detailed in Sr. Faustina’s dairy.

On 30 April 2000, Saint Pope John Paul II canonized Sr. Faustina and also declared the Second Sunday of Easter as the Feast of Divine Mercy for the Universal Church as “a perennial invitation to the Christian world to face, with confidence in divine benevolence, the difficulties and trials that mankind will experience in the years to come.”

The Image of Divine Mercy

The earliest element of the devotion to the Divine Mercy revealed to Saint Faustina was the image of Divine Mercy. According to her dairy, on 22 February 1931, Jesus appeared to her with rays radiating from his heart and said asked her to paint an image of him with rays streaming from his heart, with the words “Jesus, I trust in You”. Jesus asked that this image be venerated throughout the world and promised that the soul that venerates this image will known his mercy on earth and especially at the hour of death. 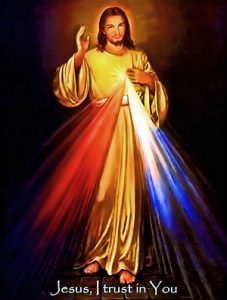 The two rays from Jesus’ heart denote blood and water. The white ray stands for the water which makes souls righteous. The red ray stands for the blood which is the life of souls. These two rays shine from the depths of God’s tender mercy as Jesus gave his life on the cross for all of humanity.

In her daily the Church’s teaching on images, justification and grace are explained. First, by itself an image is merely a painting, no matter how beautiful and expressive. Yet, it can explain to us the mysteries of the faith and dispose us to understand and receive what it represents, in this case Divine Mercy. The image is a vessel, not the source, a reminder, not the reality. The reality is the merciful fountain of grace flowing from the pierced heart of Christ on the cross, and flowing out visibly to represent the visible, that is the sacramental, signs of grace, Baptism and Eucharist, standing for all the Sacraments of the Church. Thus, Saint John in his first letter insists on the presence of the invisible with the visible, the Spirit with the water and the blood.

The image also reminds us that salvation is not just by faith, but also by works of charity. It takes faith to see and believe in what the image signifies, Divine Mercy poured out from Christ upon the cross, but it takes mercy and love in order to draw down mercy on oneself. The Matthew the evangelist reminds us of this when he wrote: “Forgive us our sins as we forgive those who sin against us” (Matthew 6.12) and  “the measure with which you measure will be measured out to you” (Matthew 7.2). The image of the pierced side of Christ pouring out blood and water reminds us that the cross, love in action, is the price of mercy, and also our example: “As I have loved you so also should you love one another.”  (John 13.34)

The Chaplet of Divine Mercy

The Novena of Divine Mercy

Beginning on Good Friday, the faithful are encouraged to prepare for the celebration of Divine Mercy Sunday by praying the Divine Mercy Novena. For nine days the Chaplet is prayed for specific intentions. An explanation of the Novena can be found here.

The Hour of Divine Mercy

Just as the image can serve as a reminder of the ocean of Divine Mercy, as well as its price, so can the daily remembrance of the Divine Mercy at the hour of Christ’s death at three o’clock in the afternoon. Jesus asked Saint Faustina, and through her us, to celebrate this Hour of Great Mercy, promising tremendous graces to those who would, both for themselves and on behalf of others.

During this Hour, the faithful are encouraged to pray the Stations of the Cross, make a visit to the Blessed Sacrament, or at the very least, to pause if only for a brief moment to pray and implore God’s mercy wherever they happen to be at that hour.

A celebration of Divine Mercy devotions are held throughout the City of Thunder Bay. All are welcome to join in those celebrations as we implore God’s mercy for the world and ourselves revealed through the power of the cross of Christ.